This year, the American holiday of Thanksgiving – established by Abraham Lincoln in 1863 and celebrated on the fourth Thursday of November since FDR mandated that in 1939 – and the Jewish holiday of Chanukah fall on the same day.  According to Chabad.Org’s “brief history” of the two holidays, this has happened three times in history: 1888, 1899 and 1918. (There are two “Texas only” exceptions that I will ignore; not many Jews in Texas). The confluence is projected to happen again in 2070, assuming that the Thanksgiving celebratory day remains the same.

And it now has a formal name:  “Thanksgivukkah”, which is a variation of the “Chrismukkah” that was popularised by the American television program The O.C. during its first season in 2003.

This is more than a footnote in history.  Wikipedia has an extensive, carefully written and well-research web page on “Thanksgivukkah” (complete with 61 references and five additional external links).  A Google search on the name comes up with more than 4.5 million hits. For those who do not know, Thanksgiving has always been a favourite holiday for American Jews:  seen as a secular Sukkot-like celebration, American Jews have warmly embraced Thanksgiving, giving them a “holiday season” opportunity to participate as “Americans” so close to the overwhelming (and off-putting, for many) Christmas.

There are also lots of cute images that illustrate this “new” holiday.  Here is one of my favourites, from The Los Angeles Jewish Journal 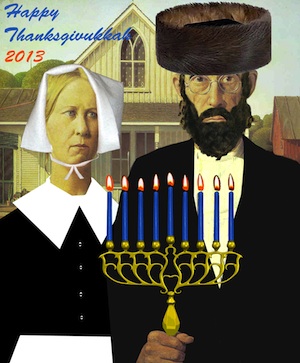 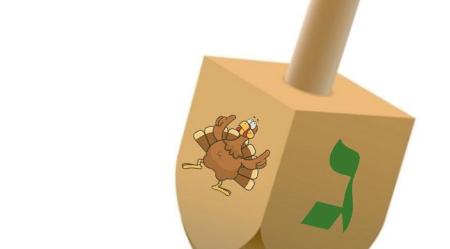 This entry was posted on Wednesday, November 27th, 2013 at 7:47 pm and is filed under Jewish, Jewish world, USA. You can follow any responses to this entry through the RSS 2.0 feed. You can leave a response, or trackback from your own site.

This site uses Akismet to reduce spam. Learn how your comment data is processed.