Film review of Patriot’s Day: A love valentine to Boston

(This film review of “Patriot’s Day” appeared in the Australian Jewish News on 9 February 2017.)

“Patriot’s Day” is one of the most powerful, sensitive and finely produced films about domestic terrorism.  Few films feel torn from today’s news pages; this is one of them.

“Patriot’s Day” dramatises the events leading up to and immediately after the Boston Marathon bombings, which took place on 15 April 2013.  This was also the Patriot’s Day public holiday that commemorates the Revolutionary War battles of Lexington and Concord, and which has been the date of the Boston Marathon since 1897 – a genuine Boston tradition in a town where tradition means something.  The fact that this film was produced and released less than four years after the actual events means that it deals with matters still raw in the American consciousness.  Just last week, President Donald Trump accused Australia of trying to send the US “the next Boston bombers” as part of the disputed refugee deal.

Two radicalised Muslim Chechen-American brothers – Tamerian and Dzhokhar “Jahar” Tsarnaev, who had claimed asylum and later became US citizens – planned and executed one of the most destructive modern terrorist events in the USA, with three people killed and 264 injured.  Once their identities became public, they attempted to flee.  Originally aiming for New York City to carry out more attacks, they killed an MIT campus policeman, hijacked a car and conducted a massive shoot-out with local police on the streets of suburban Watertown, where older brother Tamerian was killed.  Jahar was able to flee and hid in a boat, where he was captured a day later.

The film follows these facts closely, and presents them in an “up close and personal” way.  Mark Wahlberg plays Boston Police Department Sergeant Tommy Saunders, the film’s only major character who is a not real person (a “composite”), and who centres the film.  It’s a passionate and gutsy performance (Wahlberg is Boston-born and a co-producer), although one passed over in the Oscar nominations.  Almost all of the other characters are real people with their actual names:  Boston Police Commissioner Ed Davis (played by John Goodman), Watertown police chief Jeffrey Pugliese (J.K. Simmons), FBI Special Agent Richard DesLauriers (Kevin Bacon), Boston Mayor Thomas Menino, Massachusetts Governor Deval Patrick and Boston Police Superintendent William Evans.  All are convincing, but none more so or as chilling than Georgian-born Themo Melikidze playing older brother Tamerian Tsarnaev and Alex Wolff (whose father is Jewish) as the younger brother Jahar.

“Patriot’s Day” unspools in sequence, with the opening scenes introducing a large number of characters. The particular hook is that the film introduces a number of “unknowns”:  ordinary people getting ready for their day.  We sense – rightly as it turns out – that they all have a place in the story, and in history.

“Patriot’s Day” is not for the squeamish; don’t let the “M” rating fool you – it’s strong, with vivid images of the bombing injuries and the aftermath.  The film’s strengths come from its ability to portray recent history in a straightforward and clear-headed way, weaving in a large cast of “named” characters without confusing the viewer, making sense of what was in effect a massive police procedural and showing both heroism and despair.  “Patriot’s Day” is also sentimental, deservedly so, and open in its love for Boston and the city’s residents, who are portrayed with unusual delicacy, sensitivity and care..  A scene with a wordless policeman who guards the sheet-covered body of one of the victims brought wells of tears to my eyes.  The questioning of Tamerian Tsarnaev’s wife by a nameless scarf-clad female interrogator is a masterful scene of understatement, with a direct message for today’s anti-terrorist efforts.

(Image above:  Mark Wahlberg – a Boston native – in “Patriot’s Day”)

(This review appeared in The Australian Jewish News in a shorter form on 28 January 2016. Click here to view a copy of the Jewish News article.)

There are many good reasons to see the new film “Spotlight”, which details the real-life events of how the “Boston Globe” newspaper reported on and “broke” the story of systematic Catholic clergy child abuse. It’s the best film about investigative journalism since “All the President’s Men” dramatised the Watergate scandal. The superb cast – all portraying real-life characters – provides the best ensemble acting of any film in recent memory. And “Spotlight” is set in a time (2001 and 2002, spanning the events of September 11th) and a place (Boston) that grounds the film in a true historical reality, down to the thick and accurate Boston accents, and including a fabulous portrayal of a media world on the cusp of dramatic digital transformation.

“Spotlight” is the name of the “Boston Globe’s” investigative team, a group of fiercely independent journalists. In the middle of 2001, the “Globe” – then owned by the “The New York Times” – received its first editor who had not grown up locally: Marty Baron (played by Liev Schrieber), transferred by “The Times” from the “Miami Herald”, and subsequently named by “Esquire” magazine as the “best news editor of all time”. Baron was also the “Globe’s” first Jewish editor; he encouraged the Spotlight team to tackle the simmering child abuse scandal. With Catholics comprising more than half the paper’s readership – and the Spotlight team all “lapsed” Catholics themselves – it took the outsider, the Jewish guy, to force the issue, against both internal resistance and external opposition.

Baron wasn’t the only outsider on the case. Attorney Mitchell Garabedian (played by Stanley Tucci) had long represented numerous child abuse victims suing the Church. Garabedian’s character points out that as an Armenian, he is not part of Boston’s Catholic “power elite”, and thus able to challenge the status quo. In Boston, religion matters. A lot.

Although Baron and Garabedian played important roles in uncovering the scandal, the film concentrates on the work of the Spotlight team itself: lead writer Mike Rezendes (Mark Ruffalo), team leader Robby Robinson (Michael Keaton), and researchers Sacha Pfeffer (Rachel McAdams) and Matt Carroll (Brian d’Arcy James), following them through their daily grind and the emotional journeys of slowly uncovering what turned out to be one of the biggest religious scandals in American history. No-one, including this team at first, could believe that the Church had systematically covered up and protected so many abusive priests. The team eventually published 600 stories about the abuse and the team received a Pulitzer Prize.

This is a “close” and intimate film, powerful and fast-paced, with an extraordinary attention to detail by writer/director Tom McCarthy. Not surprisingly, “Spotlight” has received numerous accolades, including six Oscar nominations, for best picture, director, editing, original script and acting for Ruffalo and McAdams. Aside from the realistic Boston settings, the sense of verisimilitude is enhanced by the cast: most of the Catholic characters are played by Catholics and Schrieber is Jewish.

This is another important reason to see “Spotlight”: as one of the most important contemporary dramatic films made about religion, it holds far-reaching significance for Australia. The film concludes with an on-screen listing of 105 American cities and 102 dioceses world-wide where sexual abuse by Catholic priests have come to light: 22 of the international locations are Australian, from Adelaide to Melbourne to Sydney to Wollongong, with many in-between.

“Spotlight” also illustrates a major reason why the Catholic Church refused to take a principled stand against the antisemitic portrayal of Jews by Mel Gibson in his 2004 film “The Passion of the Christ”. According to a Boston priest with extensive interfaith Jewish experience who I interviewed in 2008, the Church’s authority was so weakened by the scandals depicted in “Spotlight” that the US National Conference of Catholic Bishops felt unable or unwilling to risk offending their constituencies by criticising a popular Hollywood film. The result: far greater success for Gibson’s film than it deserved. 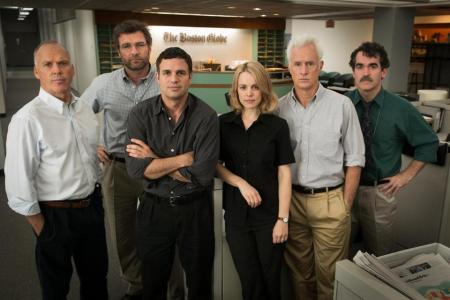 (I originally published this film review of “Good Will Hunting” in the Australian Jewish News in early 1998.  I am reprinting it in honour of the recent passing of Robin Williams.)

What happens when two former Cambridge, Massachusetts acting classmates decide to collaborate on a script about their hometown of Boston? The result is “Good Will Hunting”, a remarkable first script by up and coming actors Matt Damon (“The Rainmaker”) and Ben Affleck (“Chasing Amy”). But there is more. Damon and Affleck also star in the film in the parts they conceived for themselves.

Damon plays Will Hunting, a 20 year old orphan who has suffered through years of abuse and neglect in a series of foster homes. Will is tough, cocky and full of rage, but also has one special characteristic: he is a total genius, completely self-taught, with a photographic memory and the capacity to compete with top international mathematicians and scientists. Affleck plays Will’s best friend Chuckie, wise enough to recognise his friend’s genius, but unlikely to rise out of their working class Irish South Boston surrounds.

Will is brought to the attention of prize-winning Massachusetts Institute of Technology (MIT) Professor Lambeau (Stellan Skarsgard, recently in “Amistad”) after Will solved a famous theorem during his evening rounds as a cleaner at MIT. After Will has been arrested for assault, Lambeau convinces the judge to let Will out of jail under the condition that he work with MIT mathematicians and undergo weekly counselling. Lambeau is determined that Will fulfill his intellectual potential, and chooses his old friend psychologist Sean Maguire (Robin Williams), a teacher at Bunker Hill Community College, for Will’s therapy. Maguire and Lambeau have a long history, and it turns out that Sean also has a few hurts of his own to deal with.

From this interesting set-up, director Gus Van Sant (“Drugstore Cowboy”, “To Die For”) is able to develop a deeply entertaining story which works on many levels. At its most basic, this is a tale about breaking through emotional barriers and allowing oneself to care, at the risk of being hurt. You live life by experience, we are told. Yes, we have heard this before, but these simple truths are made more meaningful by Will’s romance with English heiress (and fellow orphan) Skylar (Minnie Driver), a Harvard student. Driver (“Circle of Friends”, “Grosse Point Blank”) has never been more luminous. But “Good Will Hunting” achieves something extra special through its delicate but straightforward approach to American social class, contrasting the uneducated South Boston youngsters with the elite Harvard and MIT students across town, cleverly playing on the iconography of American academia. (Damon, by the way, studied at Harvard: it takes one to know one.)

The result is a warm, caring, convincing and at times deeply affecting film, easily the best I have ever seen set in Boston, as it recognises the social geography of that fascinating city. Let me tell you how good this film is: If I first saw this film at age 21, it would have probably become one of my favourites of all time. Although I am well past 21, I can still see in it universal truths about finding identity and love; I was captivated.