Photography with the iPhone 6

Apple is making a big deal about how well their iPhone 6 can take photographs.  The latest I have seen is in the photograph below, which I took in Sydney’s Town Hall railway station … yes, appropriately with the iPhone 6. 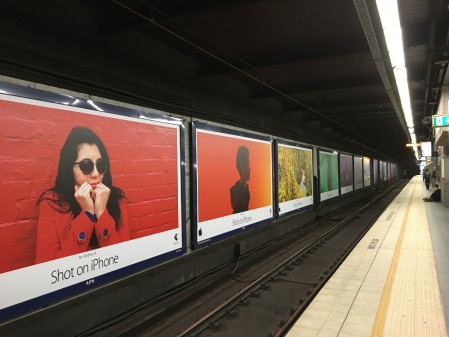 Earlier this week I received one of the best CD double albums in a long time: John Dengate’s Australian Son, which is now distributed by Shoestring Records in the Blue Mountains (and run by folksinger Pat Drummond). Dengate “was the closest heir to the legacy of Henry Lawson that this country has known”, writes Warren Fahey, in the Dengate obituary published in the Sydney Morning Herald obituary on August 19, 2013.

Many of Dengate’s songs “have already passed into that hazy territory where the song is known and the songwriter anonymous”, Fahey writes.

“Train Trip to Guildford” (1975) is one of them. This song was also my ode for a two and a half year period in the 1980s that I spent travelling by train all over Western Sydney.

From the opening stanza:

But it’s Wentworthville, Pendle Hill;
We’re rattling towards Emu Plains.
I should have got out when I heard someone shout
At Granville, “You have to change trains.”

This was my song.

Sydney (Carlingford) born, Dengate captured this time and place – those interminable Western Sydney train journeys – during the age of the unheated “red rattlers” and prior to the construction of the “Y link” that connected Harris Park and Parramatta, the southern line to the Western line without having to change trains. I worked in Blacktown then, for the Western Sydney Regional Organisation of Councils (WSROC), and I didn’t own a car. What was I thinking?

So I listen now – some 30 years later – to Dengate’s voice and his songs, yet again (my cassette tape of his songs long unusable). It was another time and another place, but that Australia of the 1970s and 1980s that Dengate writes and sings about makes us who we are now. Worth listening for anyone who has a sense of social history, or wants to understand.

Below, the Australian Son album cover:

The following advertisement for Toyota Prius appeared in the 12/19 August 2013 issue of The New Yorker.  Take a close look – some odd bits are included.  Are those really two tents – a blue one and a green one in the Arizona/Utah-style desert?  And take a look at the third one down? Those three-story townhouses look a whole lot like slums to me – either public housing or that sort of poor suburban medium density housing so popular in the early 1960s.  And why is there a bike in the photo?  Meaning?  Finally, the Prius is at home, safely “plugged in”.  No other houses around (in fact no people at all, in any of them).  Mystified by these photos, especially #2 and #3?  I am. 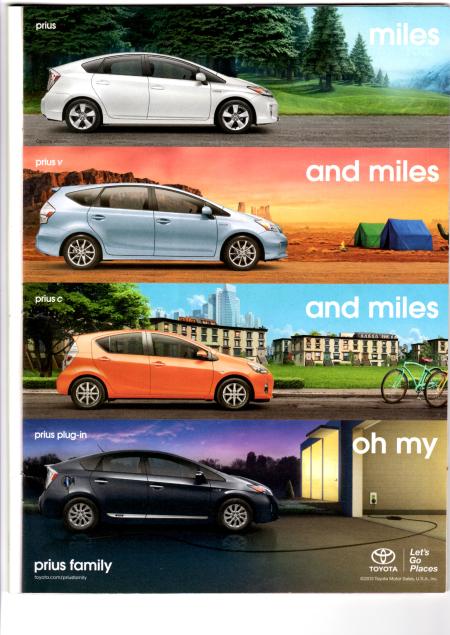 It must be said: Penn Station in New York City (between 7th and 8th Avenues, 31st and 33rd Streets, not far from Macys on 34th Street) is truly one of the least pleasant, most confusing, claustrophobic, crowded and unhappy major transport terminals I have experienced.  Low ceilings, circuitous routes, little seating, difficult access to railway tracks (don’t you love the New Jersey transit track ‘lottery’ when every stands around in crushed impatience waiting for a track to be called and then all rushes the small two-metre door at the same time), oh yes, Penn Station has it all.  It is also the busiest in New York, and is the main terminal for New Jersey Transit trains, the Long Island Railroad and Amtrak (the busiest Amtrak station in the USA, double the 2nd busiest – Union Station in Washington DC) – as well as being served by the subway lines: 1, 2, 3, A, C and E, and only one block away (6th Avenue and 34th Street) from the Path train and the N, Q, R, W, B, D, F & M subway lines.  The streets surrounding Penn Station are some of the very busiest in New York City, the taxi pick up area is a mess.  Not a happy place. 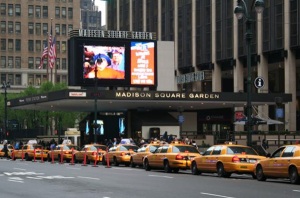 Here’s a slide show of the current station.  What a shame, as it was not always this way:  When the original Penn Station was completed in 1910, it was grand and beautiful.

Click here for some more photos. But the redevelopment czars had their way in New York in the 1960s, commencing its destruction in 1963.

And now, guess what?  They are talking about re-making it grand again – again only fifty years since the original desecration.  It is to be re-built across the street in the James Farley Post Office (post code 10001 – now, that’s a cool number, that’s the postcode we had when we lived on West 27th Street, just four blocks away). There is a great New Yorker cover from 19 September 2011 which features this post office: 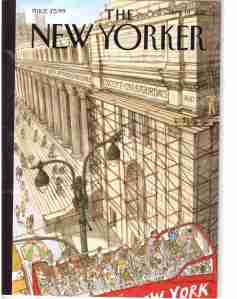 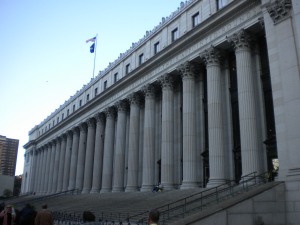 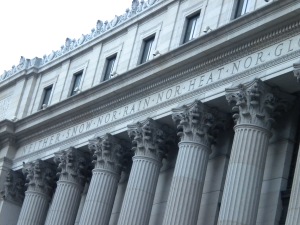 The new station is to be called Moynihan Station, named after the late Senator from New York (who served 24 years).  Not a moment too soon, but don’t hold your breath waiting: in my two months in New York in late 2011 I read The New York Times every day and saw not one mention of the new Penn Station.