For the Jewish community, there are few post World War II events more significant than the 1965 Nostra Aetate, the Vatican’s declaration on the relation of the Catholic Church to non-Christian religions.  (The phrase is Latin, and in English simply means “In our time”.)

As the Australian Catholic Church’s official website notes, the:

Last Wednesday, 28 October 2015, I attended the Sydney evening celebration of this event at Sydney’s Great Synagogue, with the keynote speakers Rabbi Dr Ben Elton (Chief Minister of the Synagogue) and The Most Reverend Archbishop Anthony Fisher OP, moderated by Professor Greg Craven, Vice Chancellor of the Australian Catholic University.

One item of note that the press coverage of the event has not picked up on was Professor Craven’s announcement that the Australian Catholic University was planning to establish a Professorial Chair of Jewish-Christian relations.  To my knowledge, this would be a first in Australia, although the model is well-established in the USA, where it has proved to be very valuable at times of communal religious stress.  When the film “The Passion of the Christ” (Mel Gibson, 2004 – and the subject of my PhD thesis) was released, the attendant controversies caused widespread fractures between the Jewish community and certain parts of the Christian communities in the USA, especially the Catholic Church.  A number of the university-based centres for Jewish-Christian relations around the country (such as at Boston College, a Catholic university) provided excellent counterbalances at the time.

The Sydney 50th anniversary event was hosted by the Australian Catholic University, the Catholic Archdiocese of Sydney, the Executive Council of Australian Jewry, the NSW Jewish Board of Deputies and the Sydney Jewish Museum.  Three images below: 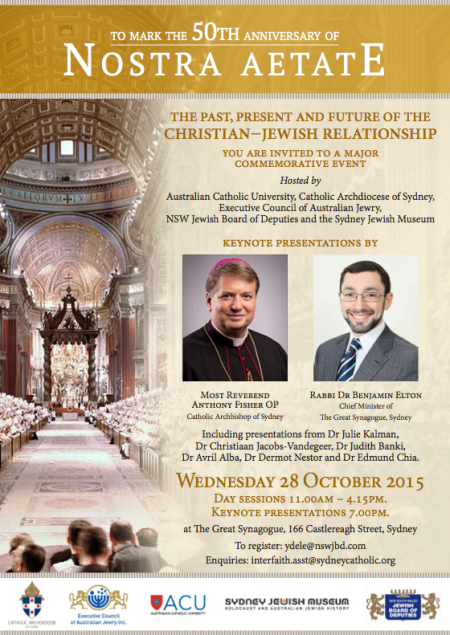 (The two photos were taken by Giovanni Portelli, Catholic Communications, Archdiocese of Sydney, and were sourced from the NSW Jewish Board of Deputies website page about the event.)